Join Miami-Dade Mayor Carlos A. Gimenez,  Miami-Dade Parks, Recreation and Open Spaces Department and Friends of The Underline on Tuesday, August 23, 2016, at 10:30 a.m., to kick-off a pop up preview of The Underline’s “Brickell Backyard” fitness area. This event will showcase the first stage of development for the planned Underline project that will transform the 10-miles of underutilized land below Miami’s Metrorail into a linear park, urban trail and living art destination. The event will be held at Brickell Metrorail Station, 1001 SW 1 Ave., Miami (just outside the station’s north exit). Event goers are encouraged to walk or ride a bike and/or take transit to the celebration. Activities include a ribbon-cutting for the site’s new mini “pop-up gym,” free workouts on the outdoor fitness equipment and opportunities to view the park renderings. There will also be yoga demonstrations, bottled water provided by Baptist Health South Florida, and more.

The preview event is the forerunner of the future “Brickell Underline Park” to be anchored on The Underline’s north end at the Miami River, near Brickell Avenue. When completed, the proposed park will feature picnic areas, park benches, native vegetation, a nature-inspired playground, a dog park, a basketball court, and art installations. Future mixed-use parks are also planned for other segments of The Underline, as well as two separate trails, one for pedestrians and the other for bicyclists. The concept for this project is being developed by the master plan design team of James Corner Field Operations, known for its innovative design of such public spaces as New York City’s famed High Line. More information on the designs can be found on the Friends of the Underline web page.

The Underline project is one of Miami-Dade Mayor Carlos A. Gimenez’ priorities and is aimed at encouraging Miami-Dade residents to walk, bike or ride transit as an alternative to driving, The Underline will serve as an enhanced mobility corridor, designed to better connect communities, improve pedestrian and bicyclist safety, and promote a healthier lifestyle with accessible green spaces and park amenities for exercise and relaxation. The project is the result of a public/ private collaboration between Miami-Dade Parks, Miami-Dade Transportation and Public Works and Friends of The Underline. It is also a part of the county’s Masterplan Greenway network that consists of 500 miles of trails and connected public spaces.

Funding for the pop-up gym equipment for The Underline’s “Brickell Backyard” fitness area will be provided by Community Outlay Reserve Funds (CORF). The cost for this development is $47,000.

Miami-Dade Parks is a world-class parks system supported by the Parks Foundation of Miami-Dade and focused on Placemaking, Health and Fitness, and Conservation and Stewardship.

WHAT:           Preview event for The Underline’s “Brickell Backyard” outdoor gym pop up

To request materials in accessible format, sign language interpreters and/or any accommodations to participate in any Miami-Dade Parks-sponsored program or meeting, contact the ADA Coordinator at pds@miamidade.gov, 305-755-7848, at least 5 days in advance to initiate your request.  TTY users may also call 711 (Florida Relay Service). 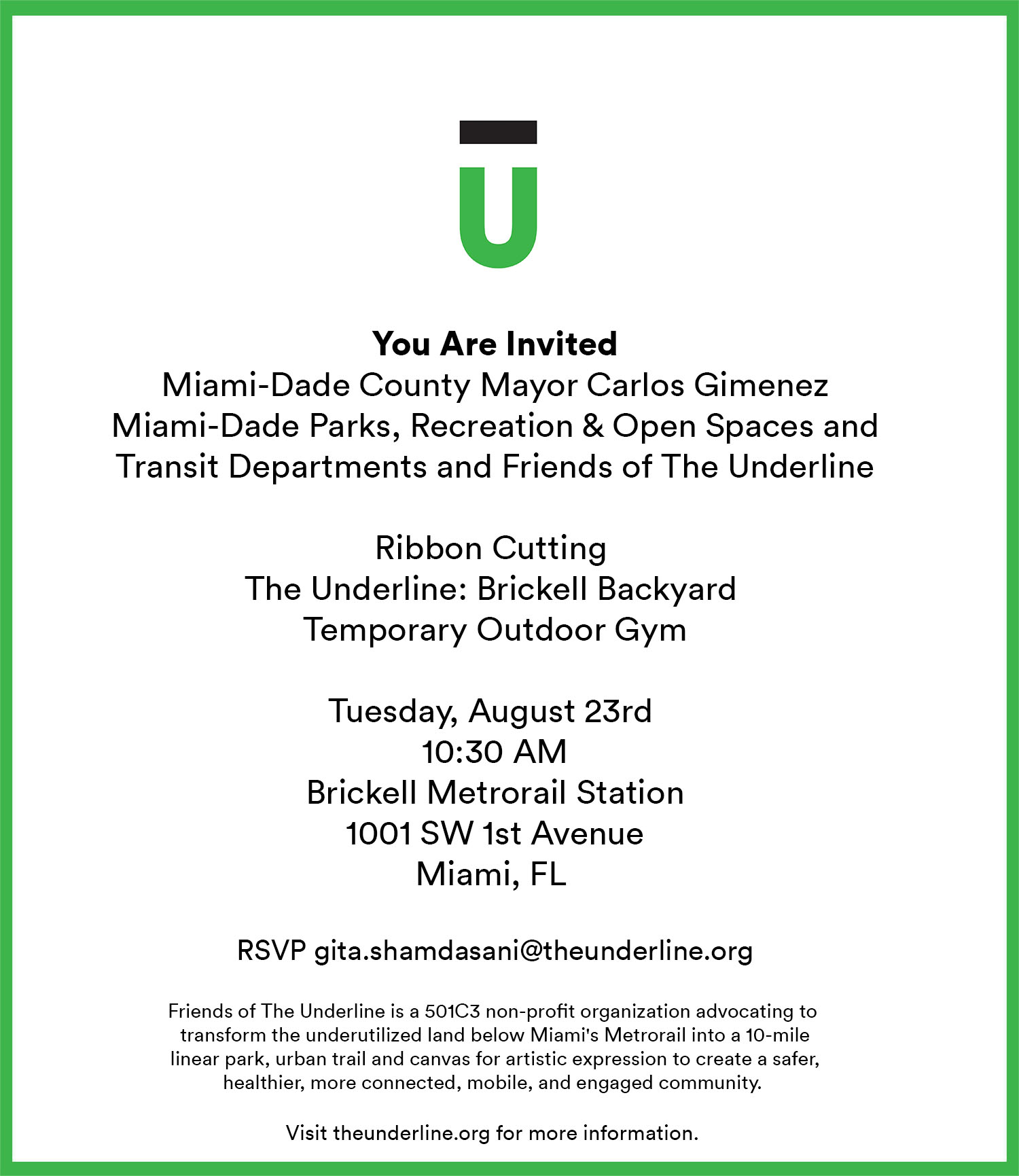