The Underline Gets $50 Million Commitment from the City Of Miami

The Underline, a planned project to transform the underutilized land below Miami’s Metrorail into a 10-mile linear park, urban trail and living art destination, received a substantial boost today with the City of Miami committing up to $50 million towards the project.

The funds were proposed by Commissioner Francis Suarez and approved by Miami Commissioners who are making efforts to increase park space in the city. The money will come via park impact fees generated from development within the city of Miami 1,000 feet from the Metrorail. With this commitment, nearly 80 percent of the project’s $60 Million cost in the City of Miami and 40 percent of the projects total $120 Million cost will be funded. 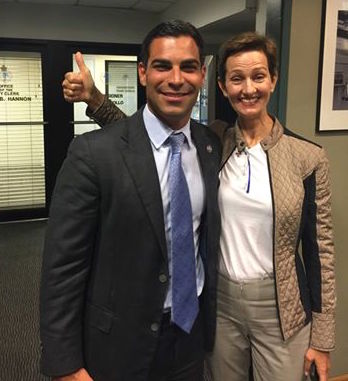 “This vote is a huge demonstration of public support for this transformative project,” said Meg Daly, president and CEO of Friends of The Underline. “From the county, state, cities and DOT, to the private sector, we are overwhelmed by the positive feedback and support. Today’s news underlines that support and will sustain our incredible momentum.”

Once completed, The Underline 10-mile linear park, urban trail and living art destination, will be anchored on the north by the Miami River near Brickell Avenue and on the south end by the Dadeland South Metrorail Station. As one of Miami-Dade County Mayor Carlos A. Gimenez’ priorities, the project has received $3 million commitment from the county and is a public/ private collaboration between Miami-Dade Parks, Miami-Dade Transportation and Public Works and Friends of The Underline, a 501C3 non-profit organization. The Underline will serve as an enhanced mobility corridor, designed to better connect communities, improve pedestrian and bicyclist safety, and promote a healthier lifestyle with accessible green spaces and park amenities for exercise, active transportation and relaxation.

The project will also have substantial economic impact by encouraging mixed use development along US 1, increasing property values, adding jobs and inviting adjacent businesses to activate and connect to it. In total, The Underline is anticipated to bring an additional $170 million in total economic output during construction and $50 million annually after completion and over $650 million in increased property values. The project is part of the county’s Masterplan Greenway network that consists of 500 miles of trails and connected public spaces.

The Knight Foundation recently announced The Underline as a winner of the Knight Cities Challenge, a grant competition that seeks ideas from civic innovators and how they plan to improve the future of their city. The Underline has also recently substantial support from the private sector including a $600,000 donation from Swire Properties and a $115,000 donation from Florida Blue. The ground-breaking for the “Brickell Backyard” Underline plan is planned for fall 2017.

About Friends of The Underline. Friends of The Underline is a 501C3 non-profit organization advocating to transform the underutilized land below Miami’s Metrorail into a 10-mile linear park, urban trail and canvas for artistic expression to create a safer, healthier, more connected, mobile, and engaged community. For more information visit www.theunderline.org and Like and Follow us on Facebook, Twitter and Instagram @theunderlinemia.